[quote = Richard from Decknique]I got in touch with one of the animators on the Cingular Blackjack commercial, Kiel Figgins. It turns out a video from Decknique was used as reference! (More details below)

None of their animators are actually cardists. They just had the reference videos to go from.

Some interesting facts:I was also given a link to the Press Release about this spot, as well as a link to a high quality version of the commercial.[/quote]

And, I'm the one doing Tornado in that video! =D This definitely made my day and week! Yay! No amount of 'yays' is enough. lol.

Tuesday, November 28, 2006
Count Filth is amusing everyone. Was half-grinning at myself when I read this interview dialog, which involves, of course, my idol, Count Filth.

If you could be drowned in anything, what would it be?
Naked female flesh. Or booze. Or Lovecraftian tentacles.

Have you had any near-death experiences?
Once on mushrooms. I transcended the universe, becoming one with God until a friend's persistent nagging brought me back from beyond the veils of death and into his rather manky flat in Colchester.

If you could make one already-written book as important and integral to Western society as the Bible, what would it be?
The gospel of FILTH [not a real book – library-bound Ed].

Do you believe in a God?
Yes I do, although it is an amalgam of all the relevant bits of other religious deities, including of course, the nasty ones. To avoid debates with so-called people-in-the-know, I get away with saying I'm a pagan.

What is your favourite country?
England, because despite all it's faults, I'm a patriot.

Are you a vegetarian?
Hardly. I like blood too much.

What has been your most notable experience with fans and admirers?
They have all been good. Our fans are the dog's bollocks and are continually surprising us with their dedication to the cause and, of course, their endless enthusiasm for our musical output.

The band spends so much time together, how do you stay friends?
Voodoo dolls, love triangles, lawsuits and forced grins.

What advice would you give someone coming to one of your gigs?
Try not to fall in love with the elder guitarist, bring stout earplugs and perhaps a little picnic for the interval.

What's your favourite booze and why?
All of them… because I'm an alcoholic.

What's your favourite drug and why?
Cocaine, although I rarely do it for that reason alone.

Who or what do you miss the most?
My wife and daughter every time I go out on tour. Oh, and my cat and Ultimate Dalek.

What's your favourite childhood memory?
A holiday at my grandparents had whilst moving schools.

What was your worst haircut?
A dye job when I was at sixth form that went wrong (it went orange), one that my mother contributed to by misjudging an under shave and making it bald. For about a week I looked like a ginger vulture.

On a scale of 1-10, how good do you look naked?
It depends what sex is looking. Since my detox diet, I reckon I could pass as an eight if the viewer didn't see my face.

Name three things you could not live without.
Sex. Cars. Heavy metal music.

Dani Filth strongly and sternly suggests that you DiScover New Project, Eggs Benedict and Dimmu Borgir. Yeah, I didn’t think you’d have heard of them either! Failing that, he would say you should go to Wacken Festival in Germany. He says it’s “metal central” and he’s absolutely correct.

Metal shall invade the minds of the commonspeople on Sunday. My Thornography CD Review will be published this Sunday in the GenY PlayBox feature. No mercy will be reserved, no one will be spared. Tonight, (Everyone will be) in Flames as the uninformed public cower Under Huntress Moon, due to their witnessing of the Rise of The Pentagram. Following suit without much delay, The Bryonic Man - none other than Count Dani, himself, annouces the Foetus of A New Day Kicking. Rising up from her Cetemetry and Sundown, Dani's eternal Lovesick for Mina shall be fully satisfied, whilst Dirge Inferno resonates throughout the abyss of the Earth, for this Temptation is too great.

In simpler, layspeople term, get The Sunday Times and start worshipping Cradle of Filth. =)

I got my pay! Yay! Unaffected by the meagre sum of currency I am receiving, I have a whole list of opportunity costs to fulfill, ranging from Falkenbach's CD to Hannah Ardent's Origins of Totalitarianism book. If there's one thing on Earth that should go into extinction, it'd be "unlimited human wants". Otherwise, I could have avoided from the pains of typing and searching for dates, titles all day long. Ugh. Anyway, yes, I'm slightly richer now. And no, I'm no philanthropist.

My once-defunct webcam is working again! Happy flourish-mad me immediately grabbed my deck (I know what you're thinking, sicko) and took numerous pictures of it. Here's it! =D 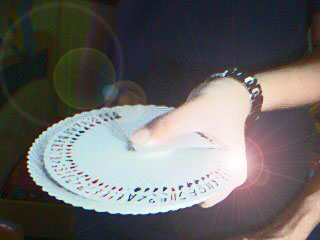 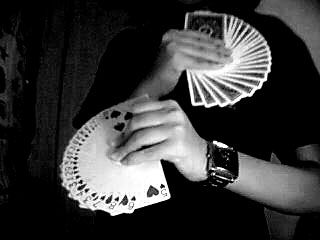 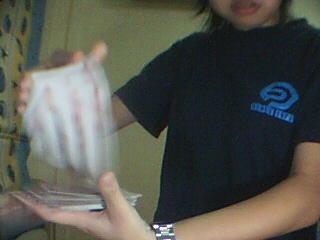 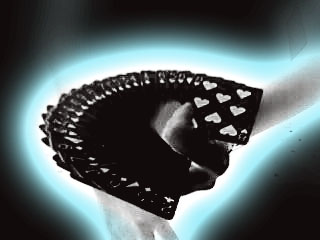 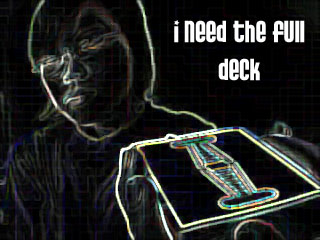 Flourish! I can't even remember when exactly I have flourished for more than an hour straight. Been too long. Due to incessant work and school, the first draining away all my time away.

Yesternight saw the crazy 8 hour long flourishing session by myself, spanning from 8pm to 3am. Plugged to my headphones with a good source of metal songs, cards in my hands, and flourish away. Yay. It feels good.

Other things, I loathe Singapore's censorship so bad. 3 days into the release date of Völkerball DVD, and not one copy is out on the shelves yet. And visiting Herzeleid.net makes me feel even more agonized, seeing people from other countries already have their Limited Edition (which costs US$100).

Still on the censorship, I look at the movies that are opening soon. 80% of them are either M-18 (50 or so days to go!) and R-21. Come on, shows like Tenacious D - the lame-ass comedy of Jack Black, are M-18 due to coarse language. Oh pleeze, kids are cursing "CB", "KNN", being exposed to various forms of violence in games, internet at ages as young as 13 or so. I don't get it. This world and society is going retrograde. Let's go back to the caves, tribespeople! Hiaz.

Sunday, November 19, 2006
The wait is almost over! The hype is reaching its peak! My body is surged with adrenaline! My wallet is ready to take the blow of it! My hands are trembling, for they shall be holding the Ultimate Rammstein DVD to date by 12 noon tomorrow!


Gah!!! As I shout out my battlecry, my mind is flooded with millions of thoughts, ranging from "I must fucking blast this hell of a DVD once I reach home!" to "I will be shit broke after getting it! Oh holy!" But I tell myself firmly, "No time for fickle-mindedness, my friend! Voelkerball is paramount!" Yes, I listened to myself.

From popping the Rosenrot Bonus DVD into my player a little more than a year ago, amazed at the splendour of a Rammstein Live show, I was informed by the forums that that Rosenrot DVD is just a mere sneak preview of what Voelkerball is going to be. I knew it, I have to get it!

I don't mind seeing a dozen of Ginger kids with braces mouthing "ist nur eine schmale Brücke" during Du Reischt so Gut in Voelkerball. Just give me Voelkerball! Blehhhh.

Why does metal paraphernalia have to torture its fans with such-insane releases and long, agonising waits? ARGH.

Wednesday, November 15, 2006
Cradle Of Filth - Her Ghost In The Fog - Alternative Lyrics

I hate TrustedHub. It's an obvious sweatshop. Enough said.

Thanks to work, I totally forgot that Norwegian guitar god, Yngwie Malmsteen is in Singapore for a one night only gig today! I feel very bad, being such a self-proclaimed professional metalhead of me. Ugh. Hate work. Hate work.

It's wake, repeat, tired, sleep again. I hate life. With holiday Lectolocausts and CCAnal propagation programmes coming up, I lament at myself, "When exactly can I go into my vampire timezone and hermitage?" I need those 2, especially when life is so full of nonsense nowadays. And, I have planned to do self-education or simply put it, Autodidiact, on ancient civilisations, more philosophy and to read Dune stuff over again.

I should see money as something less significant. Yes, I should.

China Black Metal. Curious me saw some sample mp3 files of a China Depressive Misanthropic Black Metal band, called 原罪。And, I tell you, it blown me off completely.

One of them, from their Demo CD, called, 秋月，starts off with wayang singing and er-hu at the background, then this demented voice full of hatred comes ripping open your heart, with the heavy droning guitars and drums to follow suit. In total, 7 minutes of pure misanthropic madness. It's almost like Aborton Void, but better.

If this CD ever reaches Singapore's shores, I'm getting it. Metalheads reading this, go check out this brilliant new band from China! Chinese pride!  ¶ 1:49 pm 0 comments

Waiting for it is comparable to orgasm denial! Ugh! Pah! 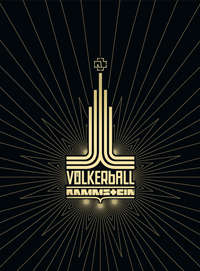 Sunday, November 05, 2006
Die Große Stille With no idea of what will be confronting me, I sat down at my seat at the National Museum's Gallery Theatre and embraced myself with the thought that I am about to sit through a nearly 3 hour long film. With no dialogue or background music. At all.

Darkness, grainy imagery, red candles flickering are things that greeted my curious, unknowing eyes. After getting myself comfortable in my seat, I placed more focus on the film. With the monks shifting their feets around the chapel in darkness for another good 5 minutes, my ears are taking notice of the silence of the film. Shifty I am, with eyes darting around glancing at who's seating near me and much thoughts in my mind, I have yet to be subdued by the silence. Yet to learn the appreciate the silence. Yet to integrate into the silence.

More imagery of the monastery life, monks getting initated, praying in their solitary cells, washing of plates, shaving, shoving of snow out of pits, prayers, trees, the aerial view of the monastery, hymn-singing sessions, walking along the hallways, eating, cooking, walking up the snowy hills, rains. The sequence of the above repeats, loops again and again, maintaining its solemn pact for absolute silence.

Soon, an hour into the film, surprisely, the thought-filled mind of mine transformed itself into one that gave thoughts into the rich imagery that the film offers. My ears, following suit with my mind, grew accustomed to silence. It's quite an achievement considering I'm on drugs for metal almost 24/7. To the extent of feeling uncomfortable if I were to shift my posture in my seat as they caused considerable amount of noise. Now, I am in the monastery. I am the monastery. I am silence.

Soon, the film was over as soon as I am getting increasingly appreciative of the eternal silence. I stepped out of the theatre, commenting to myself, "What an unique film!", adding, "I haven't wasted 6 dollars."

Sure a refreshing piece of work, and an obvious achievement in the documentary genre. If you are free for 3 hours and 6 dollar rich on next Friday night, treat your tired ears to a feast of silence and be mesmerised by it. Today's noise-polluted generation needs a dose of this. I assure you that you would come out a different person with greater appreciation for images and silence.

I rate this 5 sound-proof rooms!

Saturday, November 04, 2006
Marilyn Manson - This Is Halloween On Leno