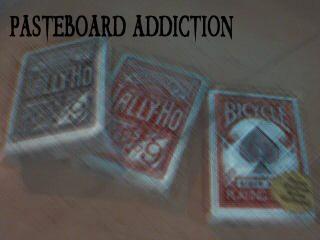 Check out my first edited picture! 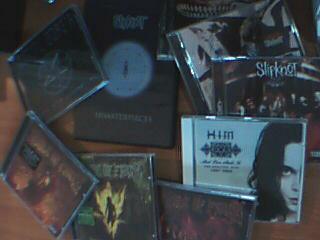 Decks galore and some fans. 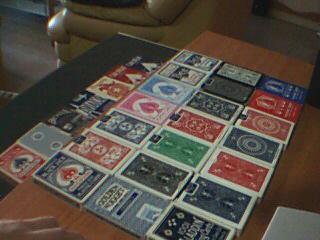 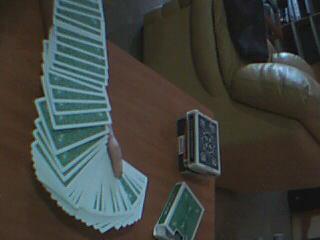 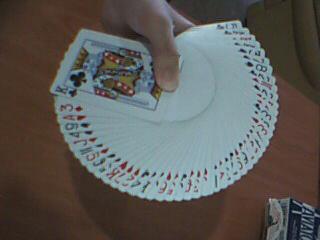 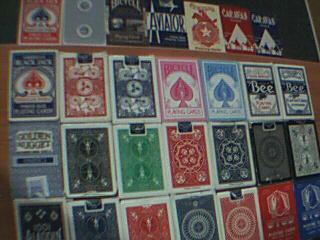 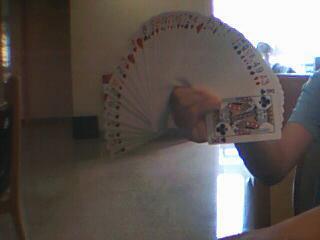 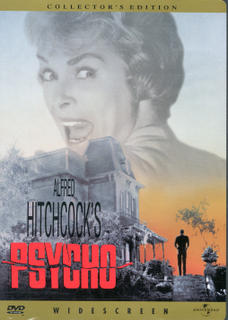 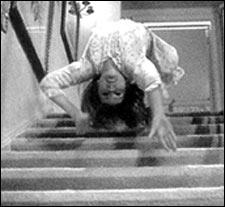 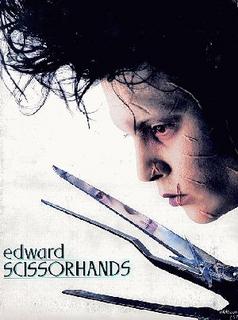 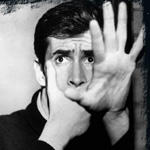 Here's a few pictures from a few movies that I really enjoyed watching. 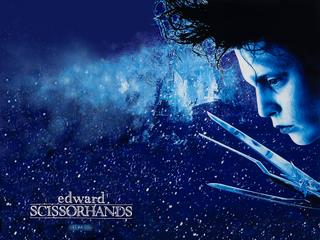 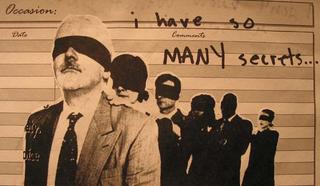 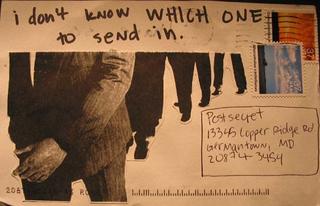 I had a hearty time watching Tv with my brother. We both laughed like nuts at some pathetic woman on Tv, which happens to be Variety Big Brother. Cranky people in that crappy show. I like.

I just realised I have a rather hunky guy for a brother. He's starting to become tanned and toned, and he's starting to syle his hair and his image. Cool! Just that he has to go out for an eye-opener instead of rotting at home gaming and to read more. He's rather funny too, he will integrate chim chinese cheng yu(s) to suan people very very very very badly, and all those yan yu(s) too. In all, he's growing into a fine man. Good. :)

Oh yes, I'm delving deeper into reading again! Hooray! My old pastime before the manifestation of magic and flourishing which has took up so much of my time for the past year. Reading is fun! Though constant hardcore reading can hurt your eyes quite a bit. Time to put a pause to magic and all which are so time-consuming, and expand my knowledge and language prowess till the level of Dani Filth The Master. And, time to get serious in my studies too. Well, not too serious. Just driven and fuelled enough. :) And, SM is becoming so boring and mundane for me, as Absence maketh the heart growth fonder, I think it's better not to waste too much time there, hanging around. Time management. ;) I feel myself maturing, forgetting past useless habits like wasting time at SM, doing nothing... Haha, I've grown!  ¶ 9:34 pm 0 comments

Well, I'm having some intense fun with a strangely enough girl named Tan Yee Shin aka Tan Eat Shit aka Tan Gu Gu (wait long long in hokkein) aka Mrs. Chew aka Boonie Shin and the list goes on. I have declared that I'm her stead on Wednesday when me and her wanted to go to Compass Point for a Rotiboy feast. Upon hearing the declaration, Jiao Bin aka JelpFINE became so traumatised, that SHE grabbed my arm and said ,"Yee Shin is MINE! Don't take her away from me! I very scared leh!' Anyways, I'm female one, because I'm shorter. Then she abruptly abandoned me, just because of that Wendy and some other girl. Sigh I guess the Boy have to wait. Before parting ways, I broke off with Yee Shin. That's a very romantic relationship indeed.

Anyways, there have been seat changes in my class. Now, there's a prisoner style of seating, each person will occupy a cell of a x-coordinate ranging from A to G, and a y-coordinate ranging from numbers 1 to 6. It's pretty much like a graph paper. So I'm incarcerated in this Cell D4. Great. My fellow inmates near my vicinity are Alden the Depressive Kid, Junjie the Ninja?!, Eveline the Outcast, Pin Jing the I-Have-Not-Found-Out-Yet, Adrain the Bear with the mind of a Pentium 4 HT computer with a 512 RAM blah blah blah, Lincoln the Uber Fast Typewriter, Calven the Chink in Detriot, and finally Darwin the Evolutionist or whatever you call it. I want Yee Shin to come nearer! I want to bully her! That's my only sane pastime in school. Please... Keep me sane, bring Shin nearer!

And, Mr Mok says he's SEXY. Doubt so. What a narcissist?!

Andm the school food officialy sucked. And the class have spammed the school with numerous suggestion forms saying Let Us Eat In Class! I have cooked up a notion of a mass Hunger Strike in the Parade Square, but no one seemed to be bothered, not a bit. Sigh. It works! Enough said, like what I wrote in the form.

Oh how great! The common test has been brough forward, which means no more clashes with Slipknot's gig! Hooray! But the CONs ultimately is that I have less time to study. DANG.

Maybe it's because of my school canteen's lousy offer of food that encouraged me to go hungry. That's definitely the reason.

Well, that's Cradle of Filth's mega Damnation and A Day's Babylon AD (So Glad For The Madness).

Well, on lookers, enjoy this visua; insanity flung at your bestial eyes. \m/

And, don't pick up unindenifited objects such as cameras on toilet seats.  ¶ 4:41 pm 0 comments

Reasons being, for German :

Rammstein being my hot favourite band, so I wan to cover their songs one day with ease and emotions instead of just mouthing the sounds. Rammstein is good!

I find German very intriguing, and an almost brutish sound but they still sound so majestic and full of meanings. It's intricate.

I want to learn German!

Dimmu Borgir, a true blue Norwegian band, has some briliant songs that were sang in beautiful sounding Norwegian. I want to cover them with ease and mastery as well.

Norway, being the ''Fatherland'' of Metal Music. Enough said.

Soon enough... I shall own a band, a black metal band, with heavy influences of the newly born genre Love Metal.

That means, my band will be covering extensively on HIM, Cradle of Filth (my chance to shriek like Dani with unbridled ferocity!) and maybe a little of Dimmu Borgir and Hammerfall.

Gosh! This is TOO good to be true.

Ok, I shall go think of a good and impactful name with loads of meanings to it.

I got hold of my first even metal gig tickets -- Slipknot's 'The Subliminal Verses World Tour 2005' Live in Singapore, Fort Canning Green.

Joey and Corey, here I come!

Oh yes, second thing, I have no idea but I feel so bored and emotionless about magic and even flourishes nowadays. Maybe it's the peak of it, now is the maximum curve, going downwards...

Ack, anyways, it's about time for me to get serious about my much yearned fantasy of being a vocalist in a metal music band! It's time.

The dream of being a vocalist has been ingrained in me for close to 4 years. So it's about time. =) Maybe I can try asking Joesph if I could join his band or not. Woot!

Anyways, they got a record label deal already. Their debut album is called Unnatural Forces. \m/

Metal made me feel truly alive, added new never-before-seen dimensions into my life. The more I listen to them, the more I feel attached to it. It's like signing a pact with the devil, selling your soul to metal. (ahem, not rock n roll)