Einsamkeit
Sunday, November 16, 2008
Fog This weekend was an especially laid back one, since I practically stayed at home and let my body and mind rest. With the surplus of time set aside from staying home all day, I decided to dig out my father's CDs which I listened to when I was a child - Les Miserables musical soundtrack, Carpenters.

It gave me the most insanely warm and fuzzy feeling as I listened on. Images of my childhood came flooding back; my old home at Serangoon (of which I remembered that I always refused to sleep on my bed since it is near a wall next to the staircase - I hated the shuffling of feet at night, it's creepy). Times with my siblings when we played at the simple (by today's technological standards) playground downstairs that has sand on the ground, and I always prefer to play with the sand instead of the playground paraphernalia, because I can write/draw anything I like on it and partially because I suck at climbing around those bars and all that jazz, and I fear falling down. =\ Which explains my reluctance to learn how to ride a bicycle. Still am now. Haha. I also recalled the low knee-height wooden table that my mother always force me and my siblings to learn reading and writing on, she is a great mother really, to buy those assessment books and get us to do it daily. My sister was resistant to that method of learning, and she'd always use her pencil to crave or vandalise the table with words which I had difficulty comprehending back then, I remembered one word she used was "idiot", and I remembered being very impressed by that word. But nonetheless, as a young adult now, I am really grateful of what my mother did, whose efforts resulted in all three siblings being in the prestigious EM1 stream, doing Higher Chinese, receiving the government's academic monetary awards almost yearly and in junior colleges. I will definitely do the same to my offsprings. Haha!

My father used to have a whole set of Children and Adult encyclopaedia sitting on those sturdy wooden shelves, and I remembered being a very bored pre-kindergarten person, who decided to flip those encyclopaedia one day and I thought it will be cool to read up on Golf because my father was into that hobby back then. So, when he and his golfing friend were conversing some days later about the clubs, I said something like "Isn't that a Wood? And that is the Iron?" That was the very first time adults were genuinely, heavily impressed by me - a mere 3 or 4 year old who was supposed to keep quiet when adults are talking. It was awesome.

Now, to less erudite pursuits of my earlier years, I recalled an extravagant incident amongst my playmates who congregated at the void deck every evening for games and plain old stupid running around and catching. One of the playmates (of whom I did not recognise as part of the clique) by the unflattering name of Curry Chicken or Chicken Curry (we can never decide which one was the grammatically correct); so this Chicken Curry stole my relatively new 4 wheeled bicycle (I refuse to learn the 2 wheeled bicycle) and somehow days later, I found it lying in a big drain all destroyed. I was furious, and me and my other playmates decided to exact revenge on that Curry Chicken. We set up a ruse to lure Curry Chicken into a empty electrical storeroom at the void deck, then I slammed the door shut and locked it with a padlock. I remembered leaving him there overnight. *Grin*

One of the fears in my childhood included an Indian guy with weird eyes and a deranged grimace who persistently loiters around the wondrous MaMa shop near my house, which effectively deterred me from patronising the shop and henceforth, the procuring of tidbits. Maybe that's why I grew up with a neutral attitude towards commodities like chocolates and potato chips. So yeah, this guy will look at me or any other kids for that matter when he is walking by and that freaked the fuck out of me and when I am near him, I will curse under my breath for my bad luck and uttered to myself, "Holy fuck! Do not get any closer to me! Fuck! No! Hell! Fuck! Fuck!" Of course, those highly sophisticated cusswords did not exist in my vocabulary back then.

I also remembered the times when I followed my mother to the market, with my brother in the pram and me just tottering at the side of my mother, while my sister is off to primary school. My mother would ask me to wait outside the very terrifying looking market (in my child eyes it appeared to be very vast, eternal and very very wet indeed) while she went to choose the fish and vegetables. Afterwhich we will go to the Bean Curd shop for Soya Bean drink and bean curd, I still recalled it to be extremely delicious and a real royal treat. Now, I really want to head back to reminisce them soon. There is a McDonalds there too, but entrance into that place was a sparse occasion because it is considered an luxury and even if we get to eat it, it will be sharing 1 meal among the siblings. As a result, I always dreamt of having one whole meal to myself. My mother would also get donuts from a nearby bakery on the way back. Those donuts are orgasmic, it's always warm, fluffy and properly sugared (the ones I eat nowadays are so lackadaisical).

Next, during my stay at YangZheng Primary School, I recalled being a quasi misanthropic fellow in Primary 2 because I sat next to a window that has a bored out hole with ants crawling out and that grim imagery made me quasi misanthropic. Haha! Coming to Primary 3, there weren't a proper form teacher so the class wasn't exactly serious in learning. I took advantage of that situation and topped the class, it was again, awesome. I remembered getting full marks for Mathematics, freaking impossible! Haha! This attracted the school authorities to offer me a Prefect status, but I nonchalantly rejected it. I also remembered playing monkey bars with the boys during recess to the point of getting blisters on my hands and fingers. Which explains my tendency to get into masculine hobbies now - card flourishing and metal music.

Weekends in my childhood were mostly spent with my family at the beach, and my mother would prepare a plethora of food and we would go on a picnic because it is cheap. We could run around the shores, bury each other's feet into the sand, dig a lagoon hoping it would work (mostly it didn't), play badminton when there is strong winds, go find fallen coconuts and wreck them by trashing them around, and tempting the tame Singaporean waves to devour our puny bodies and being really silly. My father filmed some of the outings down, trust me, upon viewing those VCDs, I feel like stabbing my younger self to death because I sounded so disgusting. I remembered being a proficient runner in childhood as I could easily outrun my father, brother and sister. I wonder where did those athletic genes have gone to? Maybe my father, brother and sister weren't serious in those footraces. Haha! One interesting beach encounter was the discovery of a Jamaican 1997 card calender on the shore of Pasir Ris beach. Jamaica all the way to Singapore. That's amazing. 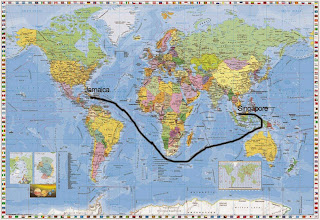 At this point, it's getting hard to retrieve any more details as most of the memories are getting increasingly vague and foggy. Unfortunately.  ¶ 8:22 pm