Einsamkeit
Thursday, January 26, 2006
Snapshots of my pasteboards... Today saw the photoshoot of the upcoming magic/flourish article at SPH. Cool place, the Straits Times office is seriously awesome. But the so-called ''studio'' isn't very impressive, it;s just a corner of a room with white background and some strong lights. [white background, thinks of Bucks immediately.]

Anyhow, enough of describing the place, let's see what I did for the article.

Think that's about it. Dang, I regretted not doing the king cobra and my whirlpool. [hopes The Virts will do King Cobra.] Nevermind that, next time =D.

And, fellow magicians and flourishers alike, grab that IN thing in Straits Times on 6th Febuary! Laminate that article and set up a shrine. =D Haha. Kidding...

Yay. Meeting up with Integral people and my Voldemort tomorrow. I'm more delighted about the latter option though.

Qouted from Voldemort: Tomorrow -- Buying stuff + roasted marshmellows + my Wormtail = Very Good. =) I am glad to be of your service, Voldemort. [I know you would give me a pat or hug as a return of my servility.]

And, the Rammstein fever has not exhibited any sign of subsiding yet. Which is a good omen. I've noticed a pattern or trend in german finally. Thus, hoping learning would be easy from now on.

And, bored as usual stuck at home, I ended up taking photos of my cards. Here's one of the stack of it: 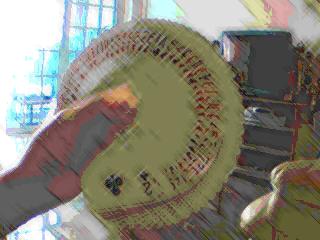 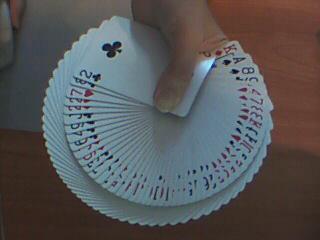 Alright, that's about it.

Til next time, Auf Wiedersehen.