Einsamkeit
Monday, November 21, 2005
Finally some news from Cradle Camp. After much wait, Count Filth finally decides to pick up his pen and click his heels together three times six and update us on the latest news of Cradle of Filth. Greato!

So here's it:
Studio update by Dani Filth

Excuse the following exercise in bad grammar, doctrinal expletives and general< buffoonery but i am writing this report from 'The Chapel' studios here in deepest, darkest rural Lincolnshire following a night out at the local pub (the only means of entertainment in the entire region) and a fall into a deep ditch full of water, having partially succeeded in rescuing a drowning football. Suffice to say i awoke this morning having half-laughed myself to death watching the two pseudo-documentaries on our soon-to-released new DVD to find my shoes caked in mud and my pants on the wrong way around (but that's entirely another story).

So far so good in respect to the new album, the producer Rob Caggianno having successfully crossed the Atlantic on what must be his fourth attempt in under a week and the band having been nicely tucked away in their respectful bedrooms, where i would indeed be now if it weren't for the fact that Rob has chosen to put the bass cabs directly beneath me in an attempt to shake all the teeth out of my head.

Incidentally Rob has been rather ill for the last four months with a stomach parasite he ingested from some dodgy food he ate in Mexico. No, the food didn't have Anthrax, but it did have something in it that causes Rob to have to take fifteen different homeopathic tablets three times daily. He actually showed us a picture of the horror he ate as taken by Scott Ian, who apparently warned him not to eat what looks like a meat 'Millenium Falcon'. In actual fact it was a skinned raw Goat's face complete with sagging eyeballs, but to a pissed-up Rob it looked like heaven.

You can see more of Rob in this state on our forthcoming DVD. He is also available for weddings and Bar Mitzvahs.

On the studio front there's not a great deal to report other than Paul's face has instantly begun to melt, sitting in front of his 50 inch computer screen (you know what they say about big screens don't you...), rehearsing the tracks and smoking the herb as if his facial elasticity depended on it. Charles is his accomplice in the rehearsal side of things although he prefers a box of nineteenth century nasal snuff to weed and a lengthy piss up at the pub with me and various sheep farmers. Adrian and Dave are busy recording drums and bass whilst i wile away the first few days amending the latest chapter to 'The Gospel Of Filth' and writing this pile of old baloney.

Incidentally the book is still progressing nicely although as you can imagine the whole process is a lengthy one what with the constant migration of ideas between conspirators and the amount of research that has gone into it's construction, although author Gavin Badderley has promised to deliver it early next year. Still, the wait will be worth it i can promise you, the chapter i have just finished proof reading on (to tie in with the chapter headed "Cruelty And The Beast") is extremely cantankerous, tracing the history of serial murder from Medieval attributions to werewolves through to modern day vampire-killers and cannibals. This chapter also features an alternative narrative on the Norwegian Black Metal murders of the mid-nineties as well as quotes and useful insights by everyone from Mushroomhead to Emperor to Charlie Manson. The next time i put poisoned ink to paper i will include a preview of one of the more juicier parts of the text for your delectation and much-sought after approval. But only if you're good girls and boys...

Never before in the history of this band have we been so ready for an album prior to going in. All of the songs have been rehearsed and demoed relentlessly, Paul is actually going over one even as we speak, over and over again to the point where i wish i'd never been born with ears. Like a bat. Still, in my sensory radar is the smell of dinner being slowly cooked, which is one great benefit of being cooped up in a residential studio. The food! By the time i go to India at the end of the year i will doubtless be about the size of a balloon with a face like Vince Neil back on the booze. To be fair though, everyone is making an effort to stay a little in shape this time around, even to the point of an early morning jog. And Dave has upped wanking himself off to five times a day AND with the other hand! Apparently. The threat of an upcoming UK tour will do that to a man you know.

On the tour front the tickets sales are going so well we subsequently decided to add in a warm-up show in sunny Colchester the day prior to Southampton. Tickets for this are scant and going fast so you'd better grab them quick if you wish to see us at our musical and possible physical worse (five weeks worth of studio banquets later... ).

Anyway, that seems to be all for now, i promise to keep you updated on a regular basis although as of next week i will be starting vocal duties concurrently in studio two. This is so i'm not left to the last minute with a stomach full of flutterbies.

We are also doing several covers during this recording period and if someone out there can guess what they are, then a signed photo of Charles wearing our new girlie knicker and bra set shall be yours. You lucky fuckers! Till next i befoul the air with my presence.... hope you all had a happy halloween! With love,

Yeah! Thanks Count Filth. Now you can shut that flapping mouth of yours, click your heels together three times six and head back to the pit that spawned you. Haha!

I cannot effing wait for Peace Through Superior Firepower! I'm sacrificing my saving and just totally splurge them on this magnificant DVD and Dimmu's Stormblast rerelease CD too. Who cares about savings when Chinese New Year is coming? :P

So here's the picture of the cover art of Stormblast: 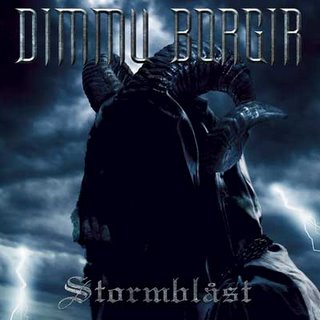 Alright, catch yer later while I meet up with The Nordic Hero, Rei for yet another bout of publik mass desekration! And I shallth point the horns of the Devil up high and Hail him loud.