Einsamkeit
Monday, July 06, 2009
Here Last Saturday, I went forth to a solitary film therapy session, one which I have not gone for in a considerable amount of time, taking into account the sheer lack of films recently that attracted my attention long enough.

I was taking quite abit of a blind plunge as this film I chose to watch is a local film made by Ho Tzu Nyen simply called "Here", thanks to the deeply engrained mindset that Singaporean films lack substance, depth and everything that contends for a worthy watch. But holy smokes, I was proven deeply and forcefully wrong with this particular visual opus.

What this film offered was a meditative reverie for its viewers where time is a variable ignored where the camera just rolled in normal relativity, upon the lush greenery around the fictitious mental facility called Island Hospital (which was really filmed in a former mental hospital, View Road Hospital, in Woodlands). While the viewers loosen their grip and minds and let them slow down to the pace of life in Island Hospital, the film soundtrack - Amazing Grace gently teases and provide an ironic icing on the film. The main protagonist of the film who mysteriously killed his wife and lost his speaking abilities had a line (more like written, actually) that blew my mind quite apart. The hospital staff asked "Why are you here?" His reply was "Because I am not there." Such hidden melancholia, such an expression of his yearning tortured soul.

There were many many other expressions of ''madness'' scattered in the film - one patient claimed there is a planet out there where pills and vitamins flow free from the volcano eruptions while the pathetic humans here pay to buy them, and one (the one which the protagonist fell in love with) claimed since things are so unevenly distributed amongst people, it isn't wrong to take things. In this film, where reality and madness were so commonly interspersed around, sanity became a commodity very, extremely questionable. What is this sanity and insanity, anyway, in this messed up world of ours today?

One character - Robert, brought up a touching (maybe!) issue called "Amor Fati"/"Love of Fate" and that it is ultimately inevitable to evade one's fate through the offered hospital treatment called "videocure", and he, heeding to his philosophy of Amor Fati, decided that videocure wasn't for him and faced with his fate of ''madness'' full throttle. This reminded me immensely of my favourite philosopher - Friedrich W. Nietzsche's notion of Eternal Recurrence, which asked people if their lives operates in a complete cyclical manner, and they have to do the same things again and again, how would they go about with life? The unbearable lightness of being.

Well, the main protagonist of the film, who eventually got released from the hospital, decided to adhere to Amor Fati and checked himself back into the hospital again, to be together with the soulmate he met in the hospital.

"My formula for human greatness is amor fati: that one wants to have nothing different, not forward, not backward, not in all eternity. Not merely to bear the necessary, still less to conceal it--all idealism is mendaciousness before the necessary--but to love it."

~Friedrich W. Nietzsche
I want to watch the film, again. 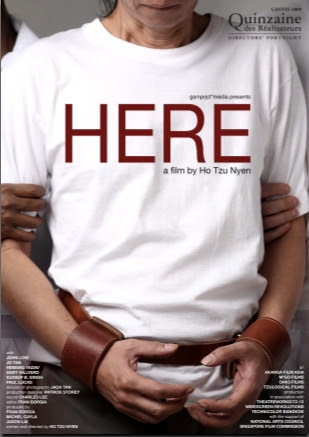