Einsamkeit
Friday, March 20, 2009
Updates: Technological advancements, fiends and Nightmarred & Dreamscarred I realised I have not spoken about my recent acquisition of an iPod Classic, replacing my 3 year old Sony Network Music Player. I am most pleased with the new purchase despite it's slightly expensive, not only does the iPod hails a behemoth storage size of 120GB, the battery life is immensely good. I have only charged it once and it is still running in the "green" area after a week's worth of regular usage. This made my Sony Network player look like a contemporary torture device in cruel disguise, complete with rapidly deteriorating battery lifespan, user-unfriendly music transfer programme, an ugly B&W interface, and most of all, a miniscule space of 6GB. Now, I can comfortably throw in my entire music library which now amasses to nearly 11GB, movies and card flourishing videos and magic performances videos and still be baffled at the amount of space remaining in this lean mean machine. The only issue is that iPod's sound quality isn't as powerful as Sony's. But hell, one can't have all the "plus" factors together. =)

And, I went out with new f(r)iends, who happened to be listeners of my favourite music genre - Robin, Hong Rui and Prab Nathan, yesterday, on a movie outing and a chill-out session. Went to watch Detroit Metal City which proved to be rather no-brainer and laugh yourself silly show. Nonetheless, it was remotely heart-warming to see metal openly displayed and blared on the cinema speakers. Metal-related jokes were flunged left, right and centre onto the suspecting herds of non-metal listening mortals, of course, they do not get it and I knew they only pretended to laugh mildy and only awaited to see the ''cute-pop" portions. Ah wells. I did enjoyed the way the DMC fans expressed their maniacal devotion to DMC, hilarious. And, of course, I enjoyed myself equally with the new friends, for it has been, easily, years since I went out with proper metal-listening people and able to talk about metal music openly and freely. It was a good feeling. Very good, in fact. Regardless of the fact we listen to different sub-genres in metal, with me specialising in black and viking/folk metal. Haha! Good time yesterday, we had, new friends! Let's hope we can meet up again soon and it will be the start of a beautiful friendship. =D

Now, the less (or more, depends on your perception) rosy side of the blog post. I was mercilessly kept captive in Lord Morpheus Sandman's realm for nearly 10 hours last night where he generously bestowed me with yet another installment of nightmarred and dreamscarred episodes. Great. So this one started abruptly with a scene with me as a third person or voyeur, if you were to use a proper term. In this scene, there was this canine (I am not using the word - "dog", for "dog" conjures up the most heartwarming and friendly images in the human brain) which was largely blood-stained on his white fur. This canine was ripping the fuck out of a person's arm and chest cavity, adding more blood stains onto his already reddened coat of fur. This canine wasn't showing signs of any relent as he mawed at the poor dude's body. Strangely, the dude was as docile as a doormat amidst the attack. Until the poor dude was ripped to the level of the bone, did the canine started to show less enthusiasm. Just like how a typical Singaporean would behave, I was feeling very "kay-po" and I followed the canine after it left the poor dude alone. Number 1 Mind-fuckage: The canine transformed into a very pale looking boy that was hardly 10 years old, he was scantly dressed but he was, like his previous incarnation as a canine, blood-stained. This thing already made me go like "Du Reischt So Gut!" in the dream. So I followed the boy, and he led me into a dark alley. Number 2 Mind-fuckage: The boy jumped into a cavity in the one of the walls and then subsequently the wall closes up and the wall was made complete again. What the fuck?! The boy fused together as one with the wall?! Fuck yes, he did.

This whole thing could be used to write a damn novel or a screenplay for a movie. Damn. I love my dreams.  ¶ 2:51 pm 1 comments

Sunday, March 15, 2009
Short but definitely sweet Today saw the public performance of a local gothic/extreme metal band by the name of Meza Virs at a very mainstream mall of Hereen. Thrilled, indubitably, by the fact that my favourite music genre will be publicly showcased, I ensured my attendance was made mandatory.

It was just very heartwarming once again to hear metal music being played with such indigantly loud and pride-laded volume at such a public place. The last time I had this experience was at the Rudra's Esplanade showcase in 2006, which was another very fulfilling performance, needless to say. To see the metal-listeners standing around, their souls proud of their musical inklings despite the glaring fact that the avenues for metal music expression here in Singapore would have severely deprived them of a healthy rate of outlet in this fashion. It's a good sight, just to see them standing around, awaiting the show, albeit knowing it'd probably not last very long. Even though we do not converse alot with each different groups of metal-listeners, we know, deep down inside, there's a connection and once the music is unleashed, the headbanging will be in perfect unison, the passion will be burning with equal intensity, our souls or psyches will be soaring high above and relishing every second of the cacophonies of the thing we all so relentlessly adore that is aptly called "Metal Music".

Just 3 short songs; 15 minutes is enough to leave us entirely satisfied. 15 minutes was definitely enough to convince me with great ease that this was better than almost the whole season of Live 'N' Loaded.

No Live 'N' Loaded luck for local metal acts? No problem. Some things are better left for the enjoyment of certain few who knows how to. =) 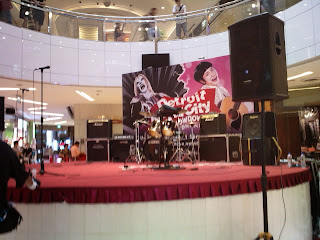 The calm before the tempest 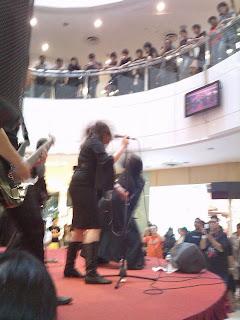 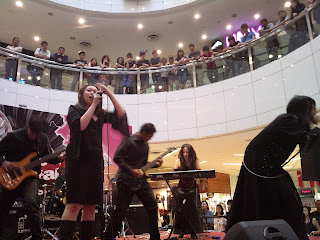 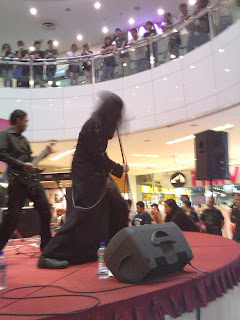 Cedric, the frontman, has a lean mean coat. Damn.

Saturday, March 07, 2009
Paradise Regained; and Watchmen So, my month long of internship is finally over and now I will no longer need to conjure very unsustainable thoughts at work to divert my attention away from the unceasing depressing sight of old fogey patients. And, most of all, at least I can stop obligating people to sign forms for me. Haha.

Anyway! To mark the regain of Paradise, I went to watch Watchmen with fellow card wielders, Leon and Kenneth and his friend with a very interesting name called Stick. Having sailed through the actual graphic novel prior to the movie viewing, I have to say I enjoyed myself more from reading the novel than the film. The characters exhibited themselves more effectively and intensly in the novel than the film, I guess, with such a morose and brooding air around this graphic novel/story, words on a page can convey better than a transient span of seconds or minutes of sequences on the screen. I was just very much blown away by the graphic novel when I finished it, intellectually, emotionally, very rare for me to even blown away slightly in the first place. I don't really care for the slow-motion emphasis of certain scenes or the auto-morphing Rorschach mask or the blue nakedness of Dr. Manhattan.

I mean, the whole thing was so multi-layered and heavy in content and rich in substance. And, yet holds that significant amount of truth about our society.

Much to my dismay, Mr. Egyptian A. Viedt was touted to be the Ubermensch of the whole gang, with his half haphazard manner of functioning. Looks like Nietzsche is once again quite misunderstood, as usual. Haha. Sigh, Nietzsche will have to roll in his grave, again. Nonetheless, I will have to take it that the writer chose to use a symbolism of mass destruction of the city dwellers as the Overcoming of the Last Man, for the era of Zarathrustra to arrive.

Next, Dr. Manhattan, this detached individual is just a tortured soul who seeks the human touch which is once and again denied. He acutely reminds me of the ideal man that Plato expounded, who uses reason as a sole faculty and continually deny himself of any desire or joy, such is a callous scientific outlook. Another tortured soul is, who other than, Rorschach? A staunch moral absolutist whose childhood failed and backfired at him, a classical serial killer case study. Deeply confused person and who, in fact, love to end his own life than to suffer living on Earth. An misanthrope. Both Dr. Manhattan and Rorschach are victims of Frued's Psychoanalysis. Unable to fix their inner conflict, they chose exile and death as their conclusions.

Lastly, the Comedian was just an anarchist and quasi-nihilist, who, in true fact, at least, in my interpretation, unable to face the harsh reality and tries very hard to brush everything off as a joke. A Stoic, I would say, if I am in a nerdy mood, haha.

So much to digest, to analyse. And, I am not even starting on the relatively normal mortals - Night Owl and the Silk Spectres.

I read an article about Watchmen and its relation to Philosophy, it is said Watchmen is fodder for philosophers.