Einsamkeit
Friday, December 19, 2008
Hanging out at a bar, darts and plummeting body temperature So, yesterday, I finally got something nice to go to. I accompanied my sister and her boyfriend, Ian to her EP promotional event at a really nifty backpacker hostel and bar called Prince of Wales at Little India, since I am rotting at home, with nothing better to expend my time on except being hell bent to up my score at this Facebook game which I highly suspect has marijuana added in.

So, we set off to the bar in a real indie style, in Ian's car, with my sister writing her music url by hand on the gig flyers painstakingly one by one in the bumpy car. I like Ian's driving style, because it's has the Tokyo drift feel to it, haha! Really quite haphazard, which was refreshing from my dad's way of tame driving. We went to an Indian restuarant for dinner which was a nice experience to have, since my prior brushes with Indian food was eating roti prataa and the usual fare at Jalan Kayu or foodcourts, which wasn't exactly the real deal.

Thereafter, I hung around the bar whilst my sister went on to prepare for her performance with her band mates, and I actually watched a football match seriously (it was a match between some Japanese team and Manchester United, ManU obviously won), I was that bored. Haha. Ian got me a drink, my first in over a year, actually.

After the gig, Ian taught me how to play darts, which I thought was mathematically tedious. Just bloody hit the bull's eye, for fuck's sake. Ignoring that aspect, I generally sucked at that game being a first timer at it, I owned Ian once though when I hit the bull's eye, that was kickass. Haha! Listened to my sister and her JC friends and Ian talked for awhile, which topics ranged from synonymous words for the word - vagina to ways to have the final and the most satisfying jerk offs to Twilight (of which my sister and Ian passionately expounded to her friends how badly it sucked, of which I share their viewpoints entirely, because I know, with overwhelming confidence that Anne Rice's vampires reign).

And, today, I went to meet the flourishers for dineer and a card session at Vivo City, went to saunter around a new shop - National Geographic, which was a really neat place where they placed photographs of theirs from different eras of National Geographic's history and selled some momentos. One thing that made me so very amazed by that shop is that there is a special chamber for customers to try out their thermal jackets where the temperatures were set to below freezing temperatures. Always wanted to try feel that sort of temperature, I enthusiastically went in with that oversized jacket (which I thought made me look a complete fool >_>). At first I stepped into the chamber, it felt completely alright, I thought, "Hey, this isn't that bad!" Until the door completely shutted itself and the fan was switched on at full speed, those grim winds were blowing at me so fiercely that I could hardly breathe properly. It was indeed cold. *Correction* Very frostbitten cold as Immortal could have put it, haha! There was a counter where you can see your body temperature. I saw mine plummeting to the range of 25 degree celcius within that minute or so. It was INSANE. Now, I have a vague idea of how David Blaine must have felt during his Frozen In Time endurance stunt. And, 60 hours. That is madness. *This is Sparta!* I could feel my blood slowing down and freezing inside myself. From that minute or so of grimness, I must say I have developed a liking for that sensation of freezing from inside out. It's just strangly alluring... Then I exited the chamber, took off the jacket and immediately, that is when my hypothalamus went bat fuck insane and started to shiver like I never shivered before. It was kickass, in a weird way.

Ling has a new goal in life - to experience the lowest temperature ever. =D 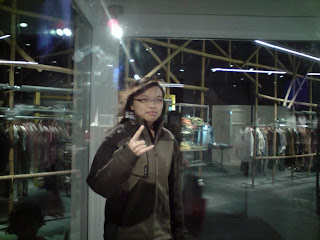 Hail to the frostbitten cold winds of Blashryk, Mighty Ravendark!

(I kind of wished I didn't have the thermal jacket on though, that will be even more intense, =P)
¶ 10:19 pm