Einsamkeit
Friday, November 30, 2007
One week on. Let's see what much (less, you meant) I have done in the span of a week after A Levels.

I have been religiously following a very odd timezone recently, which consisted of me sleeping at around 2 to 4 am and waking at around 11pm. Totally extravagrant, some might say. Slothful, some religious fanatics might complain. I don't fucking care, do I? Lol!

I have been also following a fanfict story over at AdultFanFiction.net recently, it's called Lecture Notes, written exquisitely by an talented writer called Sherz. It's my fix, currently. Since my mind is empty now, I need a new thing to fill it temporarily. Lol. Something like that.

I have dental appointment tomorrow noon. My first since 2 years ago. I am a little anxious about the notion of metallic sticks probing around my gums and shit. But I am just going to lie in that reclining chair and think about other stuff, while the dentist does the nasty job of cleaning. Good way to think about stuff, yes.

Vika's influential prowess is rather undeniable. I am increasingly interested in the much-mocked-about-over-at-Uncyclopedia Oscar Wilde and his works. Just allow this line to represent him: "I represent to you all the sins that you never had the courage to commit." Very rock-staresque adolescent of him to say that. So, yeah, I am adding "The Picture of Dorian Grey" into my To-Read list, which is getting relatively long. Bleh. Speaking of books, I have started reading "god is not Great, how religion poisons everything" by Christopher Hitchens. 20 to 30 odd pages into it. It is not an easy read, it's detailed-laden, almost like a fucking GP comprehension passage. Which is good, I miss that feeling of analysing texts and shit. Haha. I am such a nerd. That book was somewhat recommended to me by my good friend, ex-teacher in secondary school, Mr. D. Neo, thanks for it!

Speaking of Mr. D. Neo, I would like to congratulate him for his 2 month old daughter - Neo Sheer Zee学思 (which meant "to learn with thinking", derived from Confucious)! Welcome to this depressing world! Haha! I am so ... blunt. Anyhow, in the length SMS chat I had with him a few days ago, he said something like, "... and Nietzsche hasn't wrote in chinese yet." Mr. Neo, didn't know you have such insane expectations on your child. But meh, I support your cause. I look forward to a great upcoming thinker/skeptic. ;) And yes, you inspire me unceasingly, Mr. Neo. I thank you profusely for it.

Enough of teacher-admiration! Oh, Jesus, don't mistaken me as a fangirl. *rolls eyes*

On an unrelated but local note, my multi-talented sister - The Other Ling will be performing at Esplanade on the 20th in December. Come to support her, or I will dispatch ten legions of ravenous smurfs in your sleep, unrepentent mortals! Haha!

Hmm hmm, oh yes! I was reminded of the Almighty Ice Blended Milo I miraclously concocted just now. I am so fucking talented. Hehe. They taste heavenly, it's frothy ice cold milo in a cheerful looking mug for you, how luxurious! Too bad, they aren't available in UK or USA! You guys are losing out! Ren hui is ultimately right, milo rocks. Sigh.

Dang, I realised this post is going absolutely nowhere.

I just look forward to the Kitaro Concert I am going with my dad next week, my chance to listen to Matsuri live, motherfuckers! 8 plus minutes of pure gold!

I also look forward to the revamp of my home and all the rooms, new beds and repainting of walls and shit. Not bad! Albeit the temporal chaos the revamp might inflict.

I didn't attend Prom. I am such an individualistic individual as Mr. Neo once put it. More blatantly, a miserable misanthrope. Lol. Ack, I rather spend $95 on things I deem more worthwhile at *hint: more metal CDs and crap*

I realised I haven't said anything much about flourishing in quite a while. Well, let's just say I am contented at the rate I am constantly inspired and coming up with original moves. Hehe!

I ran out of things to say.

I take my leave. Au revoir, mein Freuend. (LOL! French and German together!)

Thursday, November 22, 2007
Liberation katarche! So that's it. My 2 years of JC education has officially ended, I can get my life back finally. I could still recall myself in utter dire emotions earlier this year while I struggled myself through the gruelling timetable, being always in a half conscious state of mind. I survived on thoughtcrimes and metal music from my mp3. Hard it was. I also could remember how fucking confused I was in JC1, when I kept thinking of withdrawing from JC to go to Poly, I played truancy many times, thank Loki, nothing serious happened due to that. Haha! ^^ I'm good at it.

So, there and then I was surviving on a diet of thoughtcrimes, thinking about The Outside World, trying to figure out what the heck are the lecturers saying half the time, cursing the school, text messaging my friends to make myself feel better, and otherwise, being a complete loner in school. I survived, 2 fucking years in a damned place, without any close friend I know from my previous school - NCHS. I am amazed by myself! Haha.

Here is the preliminary post-A Levels pictures I took once I got home just now; 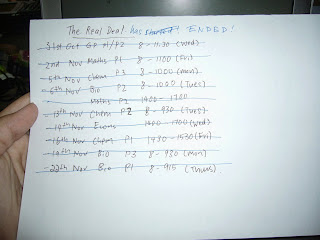 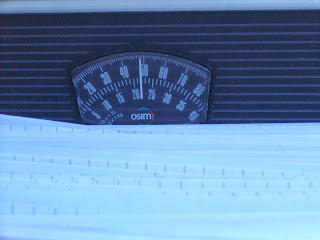 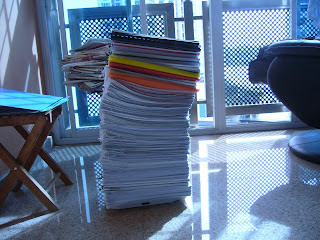 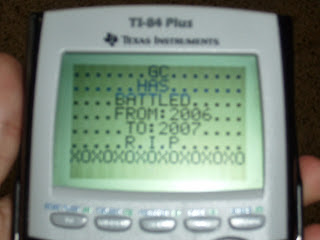 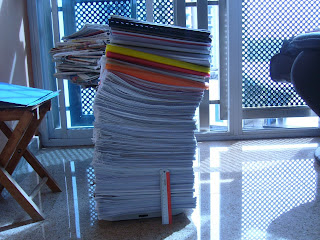 As you can use your observational skills, my notes weighs around 48-49kg. I have nearly 50kg of information in my brain, beat that. Lol.

Whee, I don't know what to say, all I am now is happy and hungry. *goes off to find food*

Wednesday, November 21, 2007
Good things! I have no idea why good things are starting to happen so late into the year, when I am done with my A Levels (Tomorrow!).

4. I get my freedom from academic constraints.

I am most excited about my freedom though. I shall take a picture of my JC notes lumped together once my last paper is done. =) Keep a look on that.

Oh! I watched a damn funny show a few nights ago. Called "Dogma", directed by Kevin Smith, recommended by Vika, now I recommend it to you. Search it up on Youtube, someone kind enough uploaded the entire movie there. =)

Speaking about films, I also watched 'Your Name is Justine" 2 days ago. Rather decent show, although I was not heavily impressed by it, it does have its moments. It has a tinge of Kafkaesque confinement quality, reminded me of Oldboy in that sense. And of course, a hint of De Sade, obvious from the film name - Justine. Haha. Not too bad, considering I watched it free, I had a movie pass. ^^

Legions, give me a call, ask me out anytime tomorrow onwards. I will be available for stoning, slacking around town, monologue-listening, emo talk, window shopping, bookstore browsing, Landmark hogging (for flourishers), meal-get-togethers, night walks, odd place tours, whatever! Just ask me out. Hehe.

Monday, November 12, 2007
=) Recently, I have been listening to quite abit of Kitaro, especially during my (largely irregular) meditation sessions.

I found a great paragraph in the lyric booklet of Mandala CD, it's written beautifully. Here it goes;

Just try and quieten your mind down for a minute and breathe deeply, feeling that Great Spirit fill up inside you. Feel the sheer bliss within your body. That is nirvana for you. =) It is that simple.

Wednesday, November 07, 2007
I have been thinking. Or aimlessly pondering on why Johnny Depp and Peter Tagtgren look so alike for the past few weeks.

I came to no answer but I derived a conclusion that they are both great artists, but biased me have to vote for Tagtgren more because he is just fucking talented and twisted. Me likey! =D 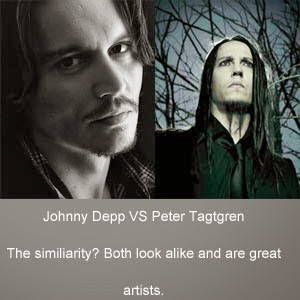 I was so overjoyed with the abovementioned fact that in the spur of ectasty, I drew this in the exam hall, which attracted a few odd stares from the examiners, which was non-chalantly ignored by me. Here's a picture of it; 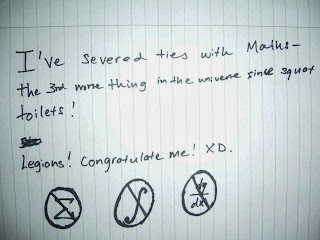 Plus, I am halfway through the A Level Ordeal, time is rather fast. And, thankfully, I have sufficient confidence in my work I have submitted thus far. Be the same for the second half, thank you! Haha.

But right now, I have to wait in agony for one week for the next paper. Agonising it was, I was droven by it to lay out my CD Collection for a little photo taking session, which I absent-mindedly forgot all about my much loved Dissection's Rebirth of Dissection DVD, sigh. Nonetheless, here's a picture of it; 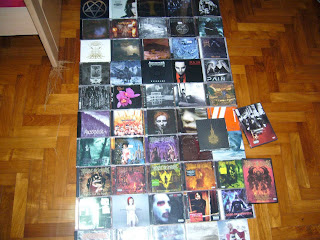 Til the stars collide and combine into a stable addition product,
- Ling.  ¶ 10:08 pm 0 comments