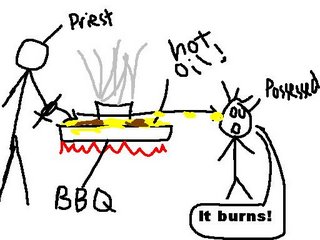 Was having dinner with my family at Marina Bay BBQ just now. Due to the excess of silence and boredom around the sputtering pan of oil and mostly, overcooked meat, me and my brother thought of a parody of The Exorcist's famous exorcism scene.

To better explain my version of the scene, a diagram would be helpful.

Firstly, the possessed would sit opposite of the priest.

The hungry priest would add loads of butter on the pan. Due to his (lack of) skill, he flicked his wrist and the dap of butter flew off at an angle that it rebounced off the pan as soon as it landed. And, flying directly at the face of the possessed.

The possessed then shriek out in the voice of Linda Blair, 'It BURNS!'

The priest would then reply, 'Tell me your name, demon!', as he went on to question his writhing pieces of meat on the pan, as a joke.

Then, I don't know how to continue already.

On a serious note, if I'd get a dollar everytime I yell out in anguish, 'PW sucks!'. I think I can buy like 3 decks of Jerry Nuggets. That's how bad PW can piss you.