Einsamkeit
Monday, July 28, 2008
Haha!
Found this somewhere on the net. 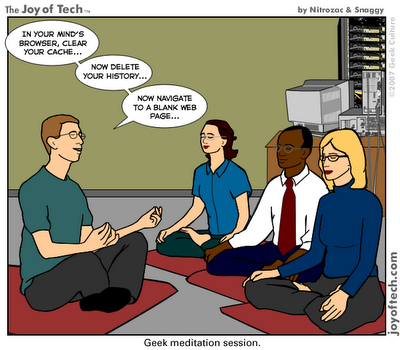 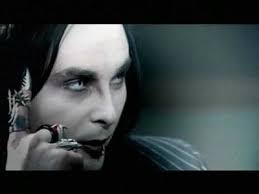 Count "Backwerdz" Dani Filth Himself, glaring out from his looking-glasses, in Babylon AD.
So, Count Dani Filth has generously brought some filthy updates from their haunted dungeon-studio upon their latest auditory (mis)deed. The album title is thus named "Godspeed On The Devil's Thunder", as comical as it sounds (oh, wait, the Filth has always been darkly comical), I still trust their word that the album would sound like their songs from their glorious ages (Dusk... right up to Midian).
Count Filth also mentioned in his latest edict the album's regal tracklist, it reads as belows;
01. In Grandeur And Frankincense Devilment Stirs
02. Shat Out Of Hell
03. The Death Of Love
04. The 13th Caesar
05. Tiffauges
06. Tragic Kingdom
07. Sweetest Maleficia
08. Honey And Sulphur
09. Midnight Shadows Crawl To Darken Counsel With Life
10. Darkness Incarnate
11. Ten Leagues Beneath Contempt
12. Godspeed On The Devil's Thunder
13. Corpseflower
I myself is intrigued about how "Sweetest Maleficia", "Midnight Shadows Crawl to Darken Counsel With Life", and the titletrack would sound like. *fingers crossed and fractured, and all ears peeled for the release of the opus* They better come up with something massively devilishly romantic which would be able to elicit strong emotions and even tears upon auditory bombardment.
Keep filthy!

Sunday, July 20, 2008
Of an inspirational picture and a few other trivialities 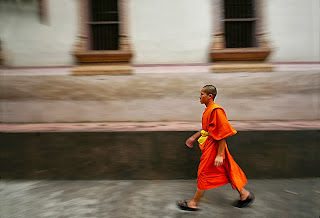 Found this picture at DeviantArt under this user's gallery. I like it alot because it encapsulates the essence of mindfulness of Buddhism so well, the stillness and the sharpness of the monk's image amidst the blurred and chaotic background while the monk walked on. Awe-inspiring to remind us that we should keep our composure and mental sharpness even in the quick-paced and stressful world of today, or regardless of our situations. In short: Never lose it. It is almost like the pictoral representation of walking meditation. Two words - freaking awesome. =D
Trivialities?
I drank barium today. It tasted like chalk water.
I am still amused and entertained by Milan Kundera. =)
I am experiencing both ennui and a simple jhana at the same time. O_o I am an eternal paradox, don't bother deciphering me. I have yet to accomplish that myself. =)
My passion in Starbucks frappocino is declining... which is good!
¶ 1:23 am 0 comments

Thursday, July 10, 2008
Damn straight, The Other Ling! So it's made public information now about her upcoming album. ^_^ Stomp.sg apparently interviewed her somehow despite her near-in-existence upon the face of the Earth besides dwelling in a dungeon studio, leading an acestic life. HAHA. As Dani Filth once commented in an interview, upon the topic of a dungeon-studio lifestyle: "No rest for the wicked!" That quote is apt here. =)

Her and her Maestro wooden-spouse (whose cacophonies are best sounded upon her sovereign caress only) at Esplanade's Concourse, I think.
Good riddance! I posted a video of her live performance of her enormous hit - Larkin Step, at Esplanade, in my channel yesterday.
Spamming time!

I just hope for a nice evening where me and her could discuss about Camus, Sartre and Life in General (which is equivalent to a popular activity of today's teens called whining, XD) together. But really, we have so much to talk about... Just imagine 2 passionate existentialists drowning in melancholy together, in the same house! That's instant kill. I guess I am blessed with such a sister around, given the horrible fact that most people out there are either apathetic (the most sad strata of the population, because they never ever think in their entire lifetime) or too stupid. =)

Wednesday, July 09, 2008
Of an old (still on-going) obsession. I was updating myself as usual on the happenings in the metal music realm by Roadrunnerrecords' Blabbermouth feed. Looks like Slipknot's 4th studio release would be out soon, it is entitled "All Hope is Gone". Before you launch yourself into a cyber attack on me and think that all hope is indeed gone within me by another Slipknot's ardent fan, I would like to say that it is really incredible for me to track back to the origins of my passion in this music genre. I remember starting to express an interest in this terrifying music genre when I was in secondary 1, that makes it 13 years old of me. So, it'd be 6 years plus of the heavy airwave bombardment for me and still counting.
I still remember the feeling of hunting down shops that store Slipknot's album - Iowa. I searched around 5 to 6 CD stores and finally got it at Bishan's Junction 8, haha. Metal CDs are hard to find back then. When Youtube hadn't existed back then, YahooLaunchMusicVideos was heaven for me, to witness live performance videos of bands, and try to imagine what is it like to attend a real performance. The loading speed was incredibly slow, so I had alot of patience for the videos. When Slipknot came to Singapore's shores in August 2005, I was one starved maggot (term for Slipknot's fans) and all I could remember was that it was the best night of my life. During the show at Fort Canning, I was trying to breathe in very morsel of Slipknot's presence. Yes, my devotion is that much. I got invited to Mayhem's post-concert BBQ party by To Megatherion's Arifeen, and subsequently went sky-high hours before the meetup. That was the second best night of my life.
From Slipknot, I expanded my obsession over to Cradle of Filth and the rest which automatically fell into place.
I faced and overrode parental disapprovals time and time again, I became financially disabled numerous times due to my penchant to collect their CDs/DVDs, I faced unusual reactions when I mentioned I listen to Metal to people (especially my JC peers), and I achieved many auditory pleasures. All is worth it, every second of that 6 years till this day.
Ah, what a passionate entry.
¶ 8:47 pm 1 comments

Tuesday, July 08, 2008
Geeky things. Vika recommended me a website that has nifty comics and images uploaded me everyday, and most of them are amusing in a geeky sort of way, which made everything double its niftyness, if there is such a word.

Speaking of geeky things, I have been using a Macbook (courtesy from my sister whose old laptop was found lying around) with such wild unrestrained abandon, that I think I am the case study of a perfect Windows Dissent who would think twice before setting my fingers to another keyboard connected to a Windows OS-operated machine. Yay! I am a Steven Jobs hippe! *dances, well, erm, not really dance, I am hopeless for that activity*
¶ 10:12 pm 0 comments

Thursday, July 03, 2008
Of a trivial heated dialogue and cadaverous winds. Last night, I was talking to an online friend of mine from Sweden about schooling and what path to take. I told him my current situation after my GSE A Levels and that I couldn't enter into the local universities and thus denied the chance to study Philosophy which I mentioned earlier to be my dream. He suggested me to quit whatever I am doing now and retake my GSEs in order to fulfill my dream and he added that since I like philosophy and a proponent of Nietzsche, I should live up to my ideals and pursue to it no matter what it takes. We argued for awhile, and I pressed on to how one should be practical, realistic and adaptable to its given circumstance (he referred this to being a puppet of the tradition and parents). Then he gave me the reply that very much bothered me. He said something like, "Nietzsche lived in a fucking cabin, rejected by his peers! Now, if you said you like Nietzsche [and refused to go ahead and pursue my ideals], then expect nobody to take you [which is me] seriously. Just like a Jew supporting Hitler."

I never ever uttered a hint of myself wanting to become Nietzsche.

I shall not ramble too much, I shall just quote a short anecdote that I think could help alleviate this emotional unrest of not being able to enter university. It's by an English monk, Ajahn Brahm and it is entitled "Poor me, lucky them".

"Life as a very junior monk in Thailand seemed so unfair. The senior monks received the best food, sat on the softest cushions and never had to push wheelbarrows. Whereas my one meal of the day was disgusting; I had to sit for long hours in ceremonies on the hard concrete floor (which was lumpy as well, because the villagers were hopeless at laying concrete); and sometimes I had to labour very hard. Poor me, lucky them.

I spent long, unpleasant hours justifying my complaints to myself. The senior monks were probably so enlightened that delicious food would be wasted on them, therefore I should get the best food. The senior monks had been sitting cross-legged on hard floors for years and were used to it, therefore I should get the soft cushions. Moreover, the senior monks were all fat anyway, from eating the best food, so had ""natural upholstery" to their butts. The senior monks just told us junior monks to do the work, and never labouring themselves, so how could they appreciate how hot and tiring pushing wheelbarrows was? The projects were all their ideas anyway, so they should do the work! Poor me, lucky them.

When I became a senior monk, then I ate the best food, sat on a soft cushion and did little physical work. However, I caught myself envying the junior monks. They didn't have to give all the public talks, didn't listen to people's problems all day, and didn't spend hours on administration. They had no responsibilities and so much time for themselves. I heard myself saying, "Poor me, lucky them!"

Lucky me, poor them!"

So what about the cadaverous winds? I had my anatomy practical session today and it's finally the turn to see real, dissected human parts. Well, first off, there's a weird smell to it, just think of the smell you encounter in the wet market, twice of it. I would like to announce that human flesh looks like the one of a duck, stringy and it does not look very tender or juicy, if you ever had any thoughts of consuming human flesh *gets reminded of Der Metzgermeister*, haha! It does feels surreal to know the pieces of meat and bones once belonged to a living human being like yourself, but that feeling quickly subsided when you are required to label the muscle and to identify the various bones and features.

We aren't allowed to stay in that room for too long so there weren't a chance to take photographs of the body parts. That was a pity. Otherwise, there's a human head with its base of the skull cut off with its eyes open, sliced brain and half a scrotum.

Now, I'd be reminded of that human flesh scent whenever meat is placed on my plate. Looks like I am unable to eat meat without difficulty anytime soon. Haha!