Einsamkeit
Thursday, September 28, 2006
Transcended.
I have transcended the stage of worrying about exams. I have greater purposes in life. And if you are still nervous after 10 years of exams, you suck seriously. Hahahaha! ^^

Tuesday, September 26, 2006
Sickness Just 3 hours ago, I feel plagued by legions of discomfort. My head feels as if they are sliced open and that my brain feels like they have been cooked. Same for my eyes, they feel like cooked fishballs in my eye sockets. My limbs felt as though they were in the Artic when my body are in a boiling chamber. My throat felt as though there's 2 steel, spiked balls, restricting my speech and causing much discomfort.

After much insane experiments I did on myself, like placing a bag of ice over my forehead, washing my hair in icy cold water, wearing a jacket in a room without any form of ventilation, flourishing, drinking a years supply of water, going to the restrooms once every 20 minutes, and thinking of my will if I ever die.

So, do not think *pro* flourishers are infalliable.

After those experiments, I think I healed myself. I didn't know I am a doctor, ah wells, I once said I am the Jack of All Trades. lol. All that is annoying me is my scorched and burnt tongue due to the boiling hot congee that I had.

Other things, I was watching Orpah talk show just now whilst performing the Auschwitz-like experiments on myself. It was about the high dropout rate in USA schools and their students' inability to adapt to college due to lack of knowledge obtained in high school. Now, I feel so blessed to be tortured upon in the MOE system. Oh! Mugging, I love you! Mug, mug and mug, thus my terrible condition a few hours ago. Bleh.

Friday, September 22, 2006
Satisfied. I believe I am the happiest person on Earth now. Those delectable cards shall soon be in my hands! =D Yay!

Philosophy test!
What is Your World View?
created with QuizFarm.com  ¶ 9:08 pm 0 comments

Wednesday, September 20, 2006
No upright crucifix shall exist in my terrority.

The Christ Church magnet I got from Malacca broke at the point of the cross. Muahaha!

Let me go totalitarian on my books and lecture notes. Let my back be bent permenantly over the table. Let my brain matter flow out of my skull in vain attempt to absorb the essence of lecture notes at a higher rate.

Friday, September 15, 2006
Update It's been almost a week since I blogged anything. So I am here to fuel your desires to know more about this drenched life of mine. =)

In this week, I am honoured enough to be mentioned in someone's english preliminary composition. The title is 'Talents", I really doubt myself about that... Ah wells. I guess it is a good confirmation of my skills in flourishing. =) yay!

Other than that, I have considered going to Sweden before the age of 20, but that thought self-destructed itself within 5 minutes. The air-ticket = Instant Killer. In addition, I was merely shifting in and out of conscious all week long, getting really delirious and mumbling crazy.

Mugging matters, school has been a total bitch and hindering my mugging plans. I question myself repeatedly, "Why the fuck the school want to busy us to this ridiculous extent and allow us with no energy or time to spare for the actual mugging?" This makes no absolute sense. Can't they standardise all dismissal times at like, 3pm, to allow better schedules of mugging. Can't they? Hiaz.

Other than that, my life = metal music + flourishing + mugging + thinking a little too much.

Monday, September 11, 2006
Nihilistic. For the last second, I could feel the nihilistic side of me taking control of me, urging me to stop breathing. Once. And. For. All. No more bullshit, nonsensical burdens of this thing called Life.

The above, although a nice profound way to say one is emo, is true and it occurs to me at increasing rates recently. I think I should set up a 'Death-Worship" cult or something.

Another things, I swear the authorities injected MuggingOxide into the atmosphere. It smells all different now, smells like lecture notes. OMG!

I want Promos to come faster. Dragging through a fuglong day of lessons is tiring. I rather 'go, get my brain fried, and rest", all in the matters of 2 to 3 hours. That's it. Doesn't it sound much better? I think it does.

I still cannot believe I attended one of their gigs.   ¶ 9:12 pm 0 comments

Fun with Val! It was late night chat with Val once again and it resulted in this particular chatlog:

Where is your children, mrs val?

i have no children

My children all dead.

My madness is huge. lol.

I killed my children.

I gonna meet up with my nchs tu di tmr

going to Mos with them tmr

Im not allowed in. LOL

we are going to have Rice Burgers!

Wednesday, September 06, 2006
New Blogskin! As you have probably used your innate observation skills, I have finally changed my blogskin! Yes. I am bidding eternal farewell to the angsty, gothic side of my online identity. It's time to mellow down. No more view count. No more flashy banners. No more budding videos. No intentions of seeing how many people view this accursed journal of mine. Nothing else matters. Call me an Nihilist. =) Last of all, kudos to the talented Maker of this skin and the even more talented band, Opeth. \m/

Anyway, it's been a while since I updated you, loyal jesters of mine, on my ever-monotonous continiuity of events called Life. Today, I went to mug with Ren Hui at the National Library. Firstly, the envrionment was superb, loved it. It's so quiet, you could hear your paper whilst it turns over. Deadly silent. I was practically lost in the monologue of mugging as I shifted in and out of consciousness periodically. Nonetheless, I feel damn effective about myself! =)

On a lesser note, Card Famine was attempted and failed. I now declare flourishing a drug-like pastime. They should print this on playing card boxes: "Once isn't enough. Think twice." or something along that line. Speaking of flourishes, I created an ace production yesterday, and I must say it look damn sweet. Heh!

It's the terribly short holidays now, and mugging and flourishing seem to be the main things that I am doing. Of the latter holds more percentage. Heh. Someone should really include flourishing as a career choice...

Ack, everything seem to be about flourishing nowadays. To just add on, here are the latest pimping pictures of my cardwork! 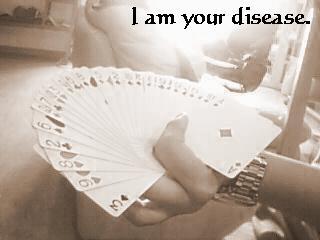 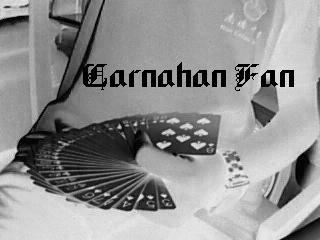 Yes, both are Carnahan Fan by The Buck Twins. Loved that move.

Sunday, September 03, 2006
Wiki! Was reading stuff on suicide on Wiki then somehow it led me to Mind Control. It got me especially interested at the Lifton Brainwashing Method, which provided 8 pointers of revelations to many proles of this world that they are being latently controlled by the evil governments. Suddenly, you see a thousand million more Winstons surfacing. Lol.

Psychiatrist Robert Jay Lifton described in his 1961 book Thought Reform and the Psychology of Totalism: A Study of "Brainwashing" in China eight coercive methods which, he says, are able to change the minds of individuals without their knowledge and were used with this purpose on prisoners of war in Korea and China. [2] These include

In his 1999 book Destroying the world to save it: Aum Shinrikyo, Apocalyptic Violence and the New Global Terrorism, he concluded, though, that thought reform was possible without violence or physical coercion.

Edgar Schein, who investigated similar programs in China concluded in his book Coercive Persuasion that physical coercion was an important feature of brainwashing.

Thank goodness I realised that terrible act earlier. Thus my stand as an Nihilist Anarchist now. Fuck everything! Heh!

Weekend has been a total stagnant time of which I took up the role of a computer sloth once again. There's absolutely no happenings for the past month, with the exception of Mega Magic. I need a damn life. I need more SMC/Flourish sessions! Ugh. All O's and A's level fault.

And, Ren Hui has been Hitler-influential to the point of making a hardened metalhead to fall for country music, such as Billy Gilman's and unclassifiedable Jean-Baptiste Maunier. Damn, those 2 guys are good. I am thinking of getting Gilman's One Voice album once I have extra cash to spare... Delectable voices, indeed. I bet she must be practising the Lifton Brainwashing Method, I swear she is.

Besides that queer obsession of mine, I do not wish to indulge in the conversation of Promotional exams. From the words of the Omni-knowledgable Jaspas, "Studying gives you the bad values! Don't study!" I totally agree on that statement. Studying kills the fun side of you, like what happened to me during the "O"locaust last year. Bad. Ah wells, I have faith in my Owning-of-classmates Legacy to continue. Heh! I really think I am a late bloomer, because things are getting easier and easier for me to absorb and that just feels great!

Alright, that sums up everything.